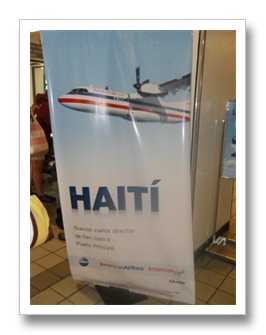 As we start our descent, I press my forehead and nose tightly to the plastic view hole to see Haiti for the first time. Beautiful, picturesque, lush with greenery and mini mountains are the first sights I see. But next to these areas, in stark contrast, are baron stretches of flat land. Incredibly straight roads or tracks which appear to reach into the mountains. On a closer look, I start to think that these are not roads but instead products of erosion, dry river beds which once ran with fast moving liquid, possibly as a result of a heavy flood or down pour.

I then start to see large areas of white and blue tarpaulin, and on closer inspection, I can see that these are actually make-shift camps- temporary accommodation and shelter for thousands of people who have been left with very little after the destruction of the earthquake. The presence of the army is another startling reality of my new location and the fact the ‘I am not in Kansas anymore’. 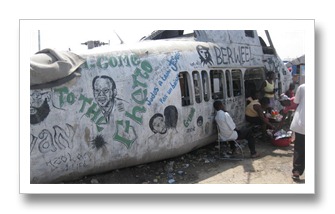 That said, it’s only due to the numbers of military looking machines and jeeps and helicopters that allows me to come to this conclusion. I haven’t actually seen a single soldier or body in uniform yet.

I land, queue for immigration, which is relatively straight forward and collect my bags along with a myriad of other people who have just landed. Haitian business men – I later learn that these proud people wear their ‘Sunday best’ on many occasions as their appearance and the way they are perceived by others (both neighbours and strangers) is incredibly important to them. A giant group of Canadian aid workers (spanning over three generations) occupy a large 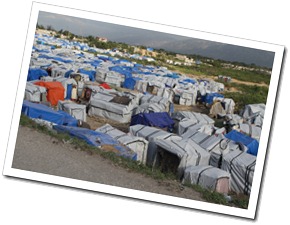 space and insist on documenting their arrival one by one. With constant clicking and flickering flashes, they take turns stepping away from their group to capture this memory. This brash action leaves me with mixed emotions. Whilst it is fantastic that there are so many enthusiastic bodies wanting to help, I’m unsure whether the photos, happy faces and sense of smugness is at all appropriate among the locals returning home, to devastation.

As I leave the baggage area there is a plethora of greeters with name signs and airport porters desperate to carry my bag for me. I scan the area of dark faces holding up signs, can’t find my name and become a little concerned. I stand back so as not to get in peoples’ way and slowly survey each sign another time; still nothing. At the end of the stretch, a large steel prison-looking gate keeps the hordes out. Perhaps my greeter is on the other side. But should I go out? Is it safe? Can I get back in? As I edge closer, I see a white smiling face beckoning me towards her. I can’t see a name board but 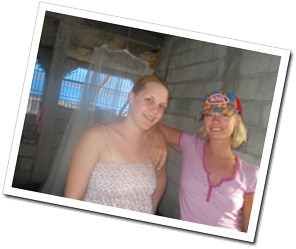 she is calling my name and her smiling face is drawing me closer. This is Georgia.  Not one of the organizers but another fellow volunteer who recognizes me from photos on Facebook. It’s only when the shoving and screaming fades that I see another white, pale face to Georgia’s left with a “Melissa Higgins” sign. This retiring individual turns out to be Michelle, our group leader from GVN who has been working for the organization for the past 7 years. I can’t help but feel that if it hadn’t been for Georgia, a 24 year old volunteer newbie, there was a possibility that I could still be standing at the gates.

An unfamiliar feeling surged through me as I walked to the other side of those gates. A feeling that clearly said, this is it! You are actually here. The reality of this trip struck me fast and hard and, for a couple of seconds, I swear my body trembled ever so slightly. I gulped down my emotion and walked the rubble road to our ride.

We arrive at our temporary accommodation to find out there are 2 camps. The people who had arrived this morning were sent to Jacmel and the remaining 6 (including me) would go to Croix des Bouquets – 15 mins from PAP. Fear and anger appeared, as we had all be told and prepared for Jacmel.

Lucy (ICC) had kindly put me in touch with two friends in Jacmel who were expecting my arrival and now I would be unable to let them know of this change of plan. A second camp had never been mentioned. Our group was a very small 12 to begin with so it seemed very strange to break us into 2 even smaller groups. Friends, family and I had taken comfort in the fact that I would be far enough away from PAP – not on its doorstep!!! Do I tell my parents or will that worry them? Should I tell Iain so he knows where I am should something go wrong, or will that worry him? Without hesitation or discussion, Georgia and I swap passport photos of ourselves in the horrible instance that we might need to ask people if they had “seen this girl!” Of course I appreciate that this is a disaster zone, but GVN have so far been disappointing. There appears to be a lack of infrastructure and the individuals are disorganized and timid and I am not only unimpressed but begin to feel scared and unsure.

Pandora and The Fairmont bring you the perfect afternoon tea!

The Green Planet – an indoor rainforest

Emirates Woman of the Year Awards 2011

Keep up to date